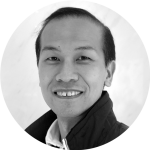 Chances are, Eddie Leung has worked on the technology powering at least one device in your home or office right now. A seasoned engineer, he’s helped developed software, mobile accessories, and even computers alongside tech giants like Apple, Dolby, and Microsoft. It’s Eddie’s behind-the-scenes expertise that will give Own The Room the infrastructure we need to continue growing around the world.

Eddie’s passion for technology shows up in his personal life, too. An avid mechanical watch collector, he has over 30 of watches, with vintage and unique models from Rolex, Audemars Piguet, and Patek Philippe. Although based in Hong Kong, Eddie often has his eyes on California, streaming NBA games and cheering for his favorite teams, the LA Lakers and Golden State Warriors. In his free time, he enjoys volunteering for non-profits like HK Cancer Fund, OxFam, and World Vision alongside his wife and daughter.