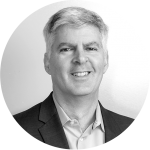 Bill gave his first commencement speech while still in his 20s. As he built his career in the nonprofit and online world, he developed a niche: tips and tricks for teaching other people to become great speakers. This system evolved to become LifeHikes.

Before LifeHikes, Bill co-founded CMI, the parent company of CafeMedia and CafeMom, and worked with Mountain Lakes International. He has done nonprofit work with Into the Streets, Do Something, and The LEAGUE, as well as America’s largest volunteer network, Points of Light/HandsOn Network.

He has delivered Own The Room methodology, leadership training, and executive coaching to business executives, celebrities, and athletes on six continents and across numerous sectors.

Bill resides in New Jersey with his wife, Maria. His greatest career achievements include getting to coach his son’s little league team and teaching his daughter to be the youngest kid to dive off the Verona community pool big diving board.