A Little Tip From Big Wilt

How can I make the not-fun parts of my job (or life) a little better?

Have you ever heard Wilt Chamberlain’s bellhop story? You may know who Wilt is. Famous basketball player, two meters tall, crazy strong, averaged 50 points a game one year.

During college, Wilt got a summer job as a bellhop. The place that hired him was in the Catskill mountains of New York, a resort called Kutscher’s Hotel & Country Club. Have you ever seen the movie Dirty Dancing or the hit show The Marvelous Mrs. Maisel, at the summer resort in Upstate New York? That’s the kind of resort. Mr. Kutscher was an older Jewish-American guy with friends who owned similar resorts. In fact, they had a friendly basketball league and played against each other over the course of the summer.

Wilt figured out pretty quickly that he was hired, not for his bellhop skills, but so he could make their team nigh unbeatable, which he did. Wilt knew he was about to be a major star in the NBA, soon to be rich and famous. So how do you think Wilt approached the bellhop part of his job? Demeaning work, picking up the bags of guests. He could certainly have blown it off, dragged his feet, or done it but resented it.

But that’s not what he did. He made a decision that he was going to be the best “f”ing bellhop that place had seen or ever would see. And people said he was. First to the bags. Great with the guests. He once jumped through a window to get to the bags. Terrific with the other bellhops. Kept in touch with people well beyond that summer.

My question is, Why? He had no earthly reason to do that, to go all in like that. Why did he do it? I never met Wilt so what do I know, but here’s my theory: Just because. For no reason except…he just wanted to. I have to believe he had a blast and was always able to look back at that time and smile.

The world can give you a thousand reasons to not fully commit, to hold back, even to be resentful of the jobs you’re given in life. I can only give you one “why” that you should: Just because you feel like it.

Life always gives us optional homework, in this case, if you are feeling the spirit or a bit Type A today, pick something that is a “bellhop” part of your life at work or at home.  Approach it differently for a second, attack it, make it a game, dance while you do it— see if you can think of some way to make it different just because you see it different. Let us know at blog@owntheroom.com what happened, we love hearing! 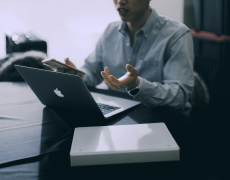 We have put together our top 10 video conference tips to be a whiz at virtual calls, presentations and video calls.

It Is About Energy Management -

Productivity is about energy management, not time management, especially when working from home. 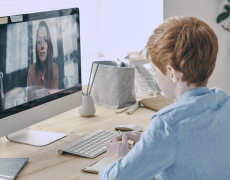 Our top 7 tips for virtual training for educators trying to master the virtual classroom.

An Intro To My Blog -

Sometimes I lose sleep at night. It breaks my heart when I think of all the people in the world, our brothers and sisters, who don’t get to realize their potential in life–at least in terms of developing their intellect or economics. To not even have a decent shot at it because of where they […]